There is something eerie about nighttime. Everyone is quiet. Everything is still. And when there is commotion, it feels chaotic yet incredibly lonely. Deep dark hours of the night have a tendency to swallow up any security I have. It’s safe to say that things felt very insecure and uncertain when we rushed Maddie to the ER at 1:30am last Thursday morning.

We had spent all day driving home from Indianapolis, turning a 5 hour drive into 10 hours. Maddox had a cold and it was making his drive unbearable. Anytime he wasn’t sleeping he was screaming, forcing us to pull over on the side of the road to soothe him or convince him that he liked The Bee Movie, which was playing on the iPad above his head. Yes, I know he’s eleven months old and couldn’t give a flying flip about a feature film. Desperate times, my dear friends. We had already stopped at urgent care once this day for him, and I was determined to get home to familiarity.

We finally stumbled into our apartment and got Maddox into a bath and then on his beloved nebulizer.  By 1am, he was lying in our bed, working so hard to take in deep breaths. We had already given him three nebulizer treatments and they weren’t working. I sat up and watched him, tiredly breathing in and out. It looked painful. After a few minutes, he stopped working so hard. His breathing became shallow.

Being new to the area, I frantically shouted at Siri. “ER!” I kept shouting. She wasn’t listening. “Siri! Emergency room!” I yelled. And then I yelled at Patrick. In my next life, I’ll be an actress. The drama runs deep, folks.

Thankfully, the closest emergency room is only a couple miles away. I felt every step of that sidewalk up to the entrance. I remember turning around to see the row of quiet, dark houses and wondered what horrible things they’ve witnessed enter into this building. I carried Maddox in my arms, cradling his weak body, and repeated out loud: “God, protect my son.” I said it over and over and over again. “God, go before us. May the doctors have the wisdom to help him or the sense to send him elsewhere.” And that’s exactly what happened.

A few hours later, as Maddie still worked to breathe from deep down in his abdomen, the ambulance was preparing to transport us to DeVos Children’s Hospital. He looked miserable, friends. There’s not much in this world that’s more heartbreaking to me than my son crying out when he was poked THREE TIMES for an IV. He searched the room for Patrick and me. Each times our eyes met, he pleaded for us. It was excruciating, friends. Four nurses held him down for several minutes at a time while I stroked his hair to comfort him. It’s all I could do. 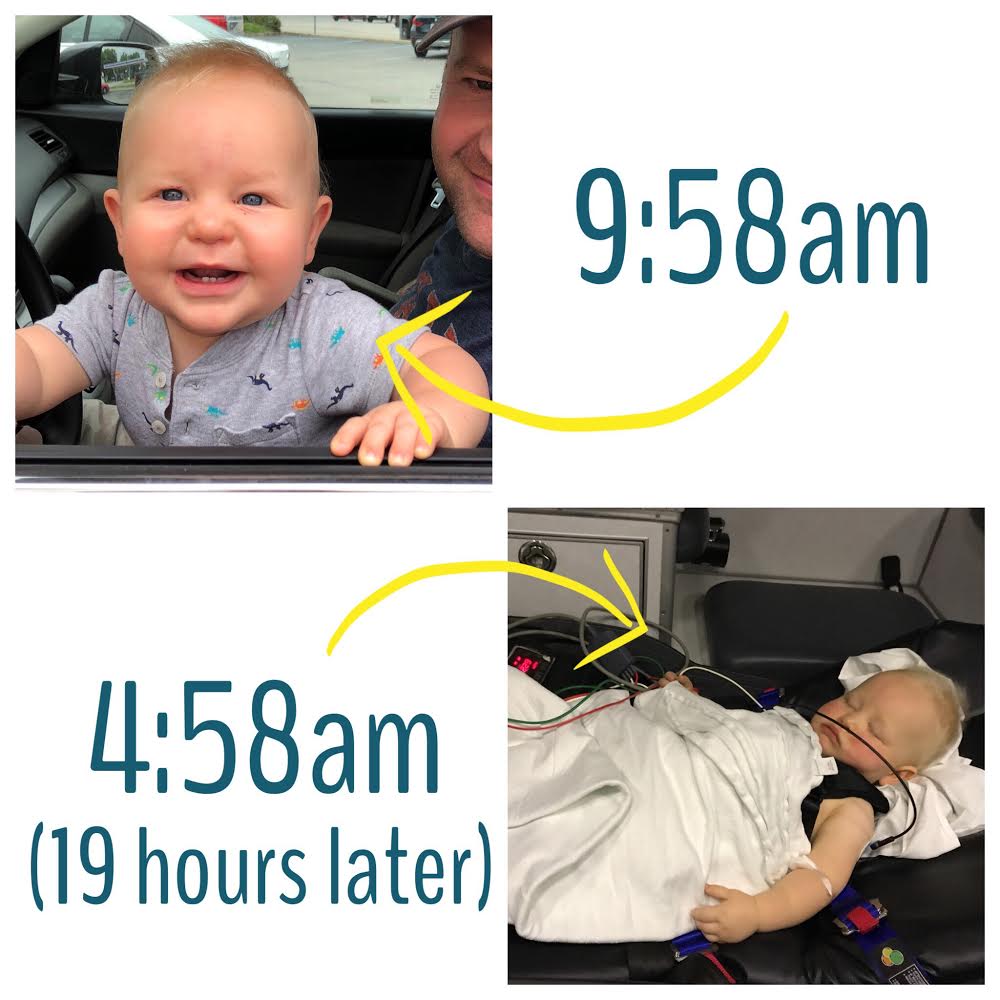 Hear this: Trust your gut. Things went from good to bad to ugly in a matter of hours. The nurse thanked us for coming in when we did. “Babies go fast,” she said. “People usually wait until it’s too late.” The lowest his oxygen read at the emergency room was 87 (I’m sure it was even lower at home when his breathing was shallow). “We get the crash cart out in the 70s,” she continued. Look stupid. Pay the outrageous ER bill. Just go.

It was nearing morning when we arrived in Grand Rapids. We were escorted upstairs where every nurse was gowned and masked. They weren’t entirely sure what he had but they knew it was viral. From that point, everyone who entered, from housekeeping to the respiratory team to the doctors, were gowned and masked as well, shedding their suits every time they left.

In the early morning hours, doctors were preparing us for a weekend stay. That afternoon, we were being asked if we wanted to be discharged that night. We were thankful.

Maddox gained a bit of energy back. The medications they were giving him were kicking in and his breathing became more natural again. Nick, Patrick, and I began to lighten up and laughed over things happening in the day. And then it hit me hard. Other parents weren’t getting good news from the doctor today. They weren’t being offered an early discharge. There was no laughter coming from their conversations. No jokes were being made about hospital food or how the nurse seemed to flirt. Others didn’t have that luxury. As we carried Maddox out of the room and down the full wing, I was grateful with a heavy heart. I am thankful that I got to bring my son home at all, let alone early. He got to spend a full day with his Wisconsin family shortly after leaving. And he’s been on the up and up ever since – giggling, crawling, and double-fisting every meal put in front of him.

It’s nighttime as I type this, and it feels less eerie tonight. It feels quiet, but tranquil. My happy, healthy son is breathing deep and sleeping soundly in the next room.

Hug your loved ones tight today, friends. Tomorrow is a new day. 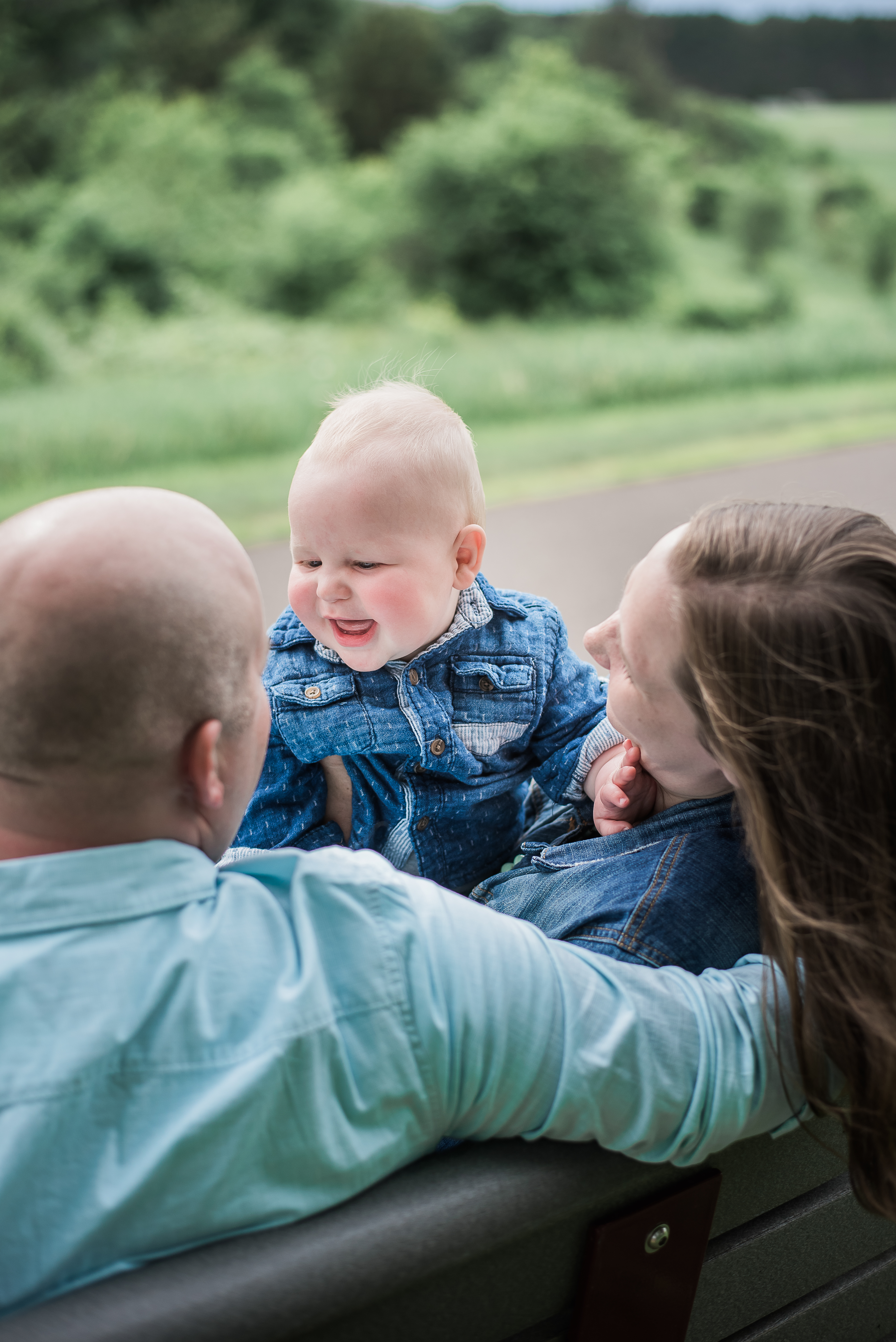